Broken Bread Club > Insights > You Are Being Watched

YOU ARE BEING WATCHED

Of the many flaws humans have or errors we are prone to, one of the most common is the tendency to put in more effort when the stakes are higher and deal with laxity when we believe the stakes are lower. What we fail to realize is that the stakes are always high. Do not despise the days of small beginnings and small audiences because those are the days that determine how far one would go in destiny. God’s position is expressed in this verse of scripture:

Scripture abounds with examples of people who were faithful in little and consequently inherited much. When we have a dream of greatness, we must understand that it starts with the little things we do today. God does not hand out giant destinies without first testing us in the little things. It is therefore important to treat every audience like the most significant audience.

Then one of the servants answered and said, “Look, I have seen a son of Jesse the Bethlehemite, who is skillful in playing, a mighty man of valor, a man of war, prudent in speech, and a handsome person; and the Lord is with him.” – 1 Samuel 16:18 (NKJV)

David was rejected even by his own family and was relegated to tend sheep while significant events were going on. However, somewhere in all this, he had displayed distinction in his gift before a seemingly insignificant group of people. There was no way for him to know that a servant of Saul had heard him play his harp and observed the brilliance with which he did. You are being observed. You must realize this. Even in the most little things, you are being watched by someone who has the clout to aid your destiny. Our first opportunities to display our gifts would not be before kings but before servants. However the dexterity with which we present before the insignificant audience would determine if we would ever show up before kings. Anyone who waits for an audience with the king to use his gift will wait indefinitely. It does not work that way. You only show up before the king by reason of excellent use before mean men. Kings in this case is a metaphor for significant people.

Saul’s servant, who remains nameless by the way, said, “I have seen…” We don’t know where and when he had the time to observe David to the level of detail of his appraisal but he did and in retrospect, he was very accurate in his assessment. David did prove to be a skilled musician, a valiant man of war, a wise and discerning king, and a man of God’s presence. It will surprise you to know how accurate random observers’ judgment of you can be. Also, it will surprise you to know how far a glowing recommendation from a servant can go.

It has been said that everyone at every given time is only six contacts away from any other person in the world. This theory called the Six degrees of separation states that everyone and everything is six or fewer steps away, by way of introduction, from any other person in the world. So you are only a maximum (could be less) of six connections away from anyone today including Barack Obama, the Pope, or Lionel Messi. It could be Warren Buffet or the poorest person on earth. This should shape our thinking and the responsibility with which we must handle every opportunity we have. You need voices to speak where yours cannot. Faithfulness in little will make lord over much.

We all are at a point in our journey and for most, we have not quite arrived our destination, neither are we exerting influence on the level of our dreams and God given destiny. However, irrespective of where you find yourself today and what you find yourself doing, put in your best. Prepare for a small audience with the same effort you would for a grand audience. Put in the best at work though you despise that mundane task assigned to you. The writer of the book of Ecclesiastes did say, “whatever your hands find to do, do it with all your might’.

As I read 1 Samuel 16 last week, I was reminded of an image I saw on someone’s display picture which speaks to my point. 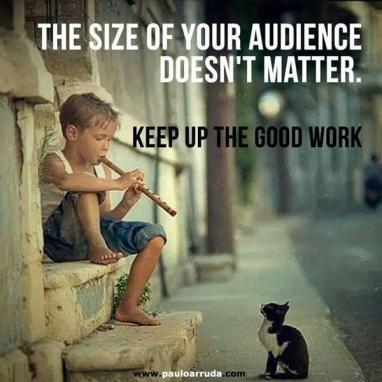 Even when we believe that no one is watching, we always have an audience worth impressing which is God. He rewards publicly for what has been done in unseen places. God watches our faithfulness in small things. He observes how a Joshua serves Moses before He makes him leader. He monitors Elisha’s service in the routine things before He entrusts him with more. His assignment was simple – pour water on the hands of Elijah. He had a reputation as the man who poured water on Elijah’s hand. However we know that Elisha did this with all dedication and diligence.

Joseph epitomizes this principle as is evident in his journey. Everything he did, he did with all commitment. He had every reason to be bitter but he never worked grudgingly. In the house of Potiphar, he served faithfully and became administrator. Again and unjustly, he landed in prison and still served faithfully.

My charge to you is to be faithful in whatever you do. Beyond faithfulness, only the best output is acceptable output. It doesn’t matter who is watching or who you believe is taking note. Your audience is always as important as the king. Your skills are noticed in the little things and the king is always observing, but through the eyes and ears of others. Shalom.

I am passionate about excellence and my God given mandate of raising a people of purpose, walking in the fullness of their identity as Kings and Priests unto God More by AOA

The Extreme Standards Of Destiny

HOW TO RECOVER FROM FAITH ACCIDENTS

FAITH ACCIDENTS – WHAT THEY ARE AND WHY THEY OCCUR